This page is for anything for sale other than my range of kits and bits in an attempt to de-clutter the home page.

After buying dozens of Shapeways bodies to design chassis for them I need to sell some on to make room for others.  Some listed below are popular so I always keep a couple in stock.  None have couplings which I leave to the purchaser to sort out. 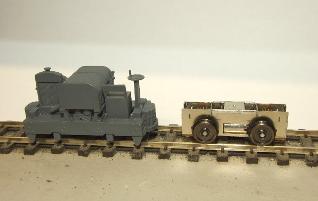 Open plate frame Simplex by David Malton (David's Railway Bits) on my Universal Power Bogie, a very nicely detailed print and a good slow runner.  Both 16.5mm but can be re-gauged to 12mm minimum.

No longer kept in stock but I can get them to order, £110 complete.  I know, its got no cab and should be cheaper but its only available in high detail now. 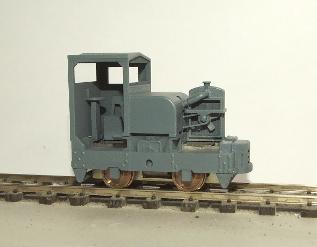 Plate frame Simplex with cab, as above but with a cab.  This and the above have weight already added so are ready to use other than couplings.  I usually have 2 in stock with the chassis part built so they can be ready in a couple of days. 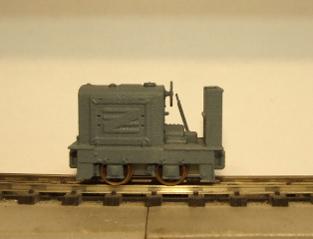 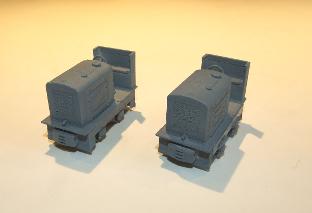 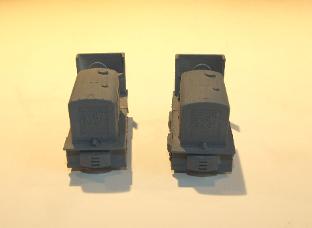 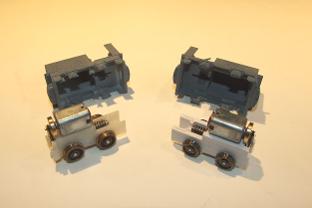 I was asked by a customer to make a chassis for a Jung EL105 in 16.5mm, the Shapeways body is too narrow and can only be mated with a chassis in 14mm or less.  Since he had the body sent directly to me I thought I would have a go at it.

The original thought was to add side L beams to move the axleboxes out, as used on Rustons for gauges over 2 feet, but I went for a simpler version on the day.  The side frames with axleboxes were cut out and a strip of plastic card with some rivets added was glued across the gap.  The axleboxes were trimmed to form a step at the top and were glued in place.

I think the result is quite acceptable and is not much wider than the 14mm version.  The pictures show the 14mm one on the left and 16.5mm on the right.  After taking the pictures I realised that I had used the wrong wheels on the 16.5mm one and changed them later.

If you have a hankering for a small loco not usually suited to 16.5mm, ask me as a conversion may be possible, the price will vary according to the complexity. 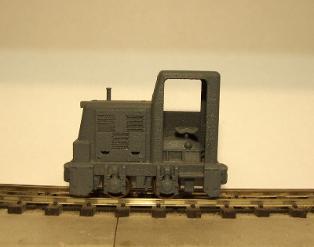 If you missed out

If you missed out on any of the locos advertised above I can always do more, the chassis can be ready in 2 or 3 days but the order for the body from Shapeways can take 2 weeks.

All are supplied running with the body in primer, I also fit a mesh for the radiator if this is missing from the print.  Any gauge from 16.5 to 12mm available but not always 16.5mm as some bodies are too narrow, 10.5 and 9mm are special order only and not always possible.

See the list on the right for locos already catered for and others are still to be added when I get to them.  The Gnomy tram was for a customer and fits simply by removing the ribbing in the yellow plastic lower part.